In the photo above you can see the beauty of Palmyra few years ago: an astonishingly well preserved ancient city in an oasis in the middle of the desert.

By pure chance, 4.000 years ago this oasis became a stopping point for the caravans travelling the Silk Road before getting to the Mediterranean ports.

And this was the beginning of its grandeur.

But the isolated caravanserai between the palms (Palmyra, means City of Palms) rose to prominence only in the first century BC, during the Roman Empire.

The village developed into a beautiful and rich city: spices, silk and ivory coming from East and statues and glassworks (from Phoenicia) coming from West met and were traded right here.

The golden age of Palmyra lasted about 4 centuries: it was declared free city by the Roman Emperor Hadrian and many beautiful temples were built, including the temple honoring Baal.

As the Roman Empire faced internal political instability, Palmyra took the opportunity to declare its independence through a revolt led by Zenobia, who then became queen of a vast empire encompassing Syria and parts of Egypt.

But when Roman emperor Aurelian retook the city, the powerful queen was taken back to Rome and Palmyra began to decline in prominence.

For years, until the blast of the Syrian crisis in 2011, Palmyra has been visited by hundreds of thousands of visitors, who enjoyed the beauty of those majestic ruins, very well preserved in the dry desertic climate and standing proudly against a yellow and green landscape.

But Palmyra has been a battleground in 2013 and damaged by the clashes.

Even before, it was damaged by the Syrian army, that in 2012 deployed in the area and made various damages to the site, including  removing soil, digging trenches,  building roads within the archaeological area and removing and displacing ancient stone blocks in the center of the archaeological site for defensive purposes.

The temple of Baal stood proudly for about 2.000 years, but humans eventually got rid of it.

Several parts of it were damaged by bombings in 2013, and few days ago, the Islamic State fighters destroyed it with dynamite: the massive columns lie now on the ground, and the same fate has faced the nearby Temple of Baalshamin.

The UNESCO World Heritage Site has been heavily damaged and will never be the same.

Those photos are a relic of the past, and depict how it was.

Today ISIL black flag waves over the Fakhr-al-Din al-Maani Castle, overlooking the entire site, and nobody knows when the site will be freely accessible again. 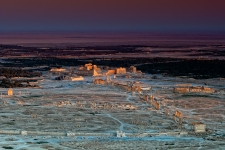