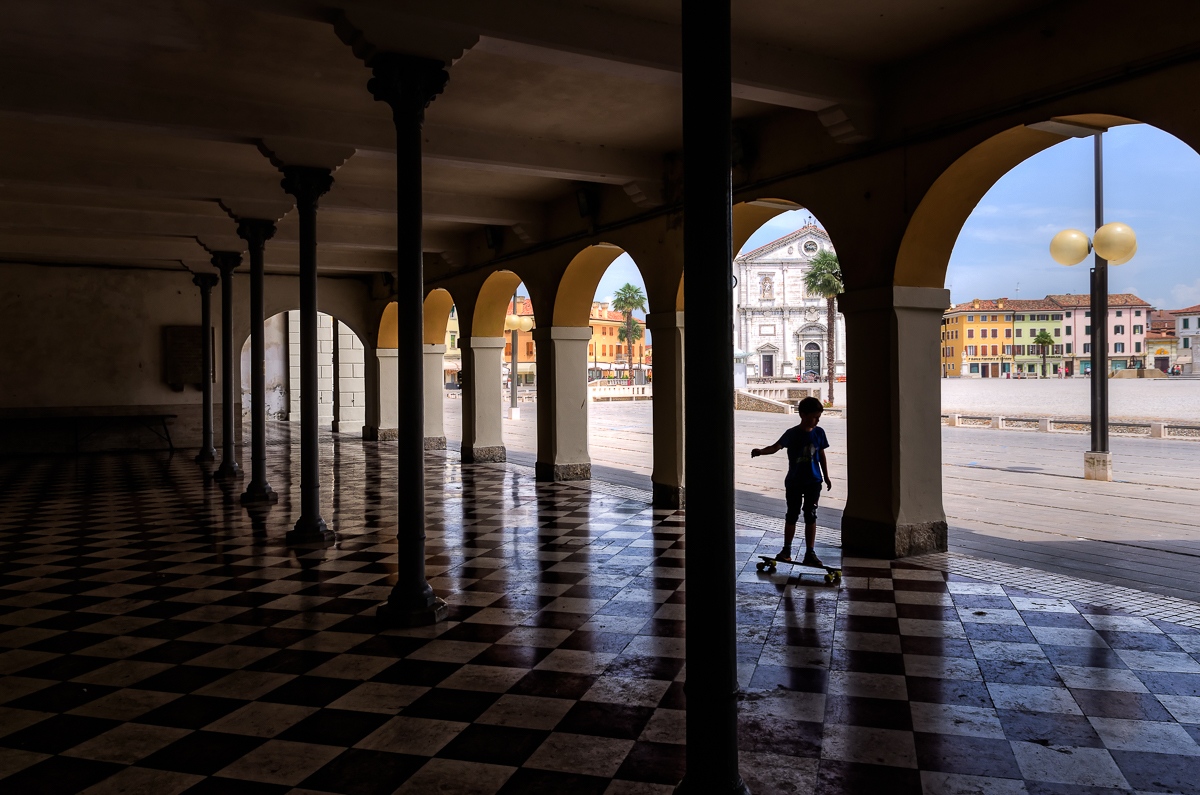 Located in Northeastern Italy, Palmanova is a unique town. A great example of a Renaissance planned town meant to be used as a living are but also as a fortress and stronghold.

Palmanova has the shape of a star. Right in its middle there is a huge square, an enormous empty space that was once used for military musters.

The town was built, following the ideals of utopia, at the end of the XVI century by the Republic of Venice. It was the last outpost before the border with the Austrian empire. Unfortunately, no Utopian society was grounded there. Nobody accepted to move to the new town, that remained for long time only a military structure, until the Venetian Republic started to offer former convicts free land in Palmanova.

The problem was that Palmanova was a sort of town barrack, or barrack town. Not only. It was also obviously built in dangerous proximity of a border. This proximity made theoretically dangerous even simple farming. Not to mention the possibility of a war with its consequences.

And Palmanova witnessed a bunch of battles. It also belonged to different countries along the centuries: Austria, who conquered it by deception, France and finally Italy, in 1866.

As a barrack town Palmanova has lived a prosperous life until the end of the XX century. It was a border town and an important military center along the eastern border of Europe. Few kilometers away, at the end of the big plain, was Yugoslavia, and thus the beginning of the Eastern block.

After the fall of the Berlin wall and the dissolution of USSR and Yugoslavia, Palmanova lost its military importance. It was slowly abandoned by the army. The whole economy that pivoted around the military system crashed.

Today Palmanova is a small town between fields and vineyards, with its huge barracks still empty and waiting for a new destination.

But don’t underestimate it as destination for a day trip. It’s just a short trip away from Venice, Padova, Trieste and Treviso.

Here you can find beautiful examples of the pristine Venetian architecture.  First the gorgeous Cathedral and the archway in the southern side of the main square. You can also find Austrian and Napoleonic heritages: the powder house, the defensive Napoleonic barracks along with the newer Italian buildings and barracks.

The visit is very interesting. You can feel a sense of abandon.

Three radial avenues are intersected by nine radial roads that depart from the huge central square. Only three of these streets go through a gate outside to the empty space via roads that lead to Udine, Cividale and Aquileia.

Just walk to the gates and think of them as they were at the beginning of the history of the town. You can still see the big wheels used to lift the drawbridge.

And when the drawbridge was up and the gates closed, the town and its inhabitants were completely isolated. A star shaped cell in the middle of a huge plain, almost completely surrounded by a hostile empire.

At those times nights should have been very dark and frightening….