If the name Ohrid sounds new to you, then you are probably missing one of the many hidden gems of Europe!

Ohrid: the town and the lake

We are in Northern Macedonia.

Ohrid is a town of about 40.000 and it’s a very old city. In middle age, it was the middle-point of great cultural transformations.

The Ohrid Literary School was established here in 886 by Clement of Ohrid. It became one of the two major cultural centres of the First Bulgarian Empire. Here was forged the Cyrillic alphabet that’s still today predominant in the countries speaking Slavic languages.

Clement of Ohrid was a monk, and he settled here to find peace and calm for his meditations and studies. Soon he realized that the town, placed on a steep hill just above the lake, was perfect for his purposes. Many scholars followed him. They settled in Ohrid and began to meditate, pray and building churches.

At one point there were in Ohrid 365 churches, one for every day of the year. The town was the seat of the Bulgarian Patriarchate. When the Byzantines conquered it, downgraded it to an Archbishopric.

It was only a nominal downgrade. At its peak, it subordinated the Sofia, Vidin, Vlach and Moldavian eparchies, part of the former medieval Serbian Patriarchate of Peć, and even the Orthodox districts of Italy (Apulia, Calabria and Sicily), Venice and Dalmatia. Quite a wide jurisdiction indeed!

Many have ruled over Ohrid in the following centuries: Normans, Serbians, Albanians, Ottomans. It became Yugoslavian at the end of WWII. All these dominations created a beautiful melting pot of population and culture and a peaceful way of living together for different religions.

Today in Ohrid you can find catholic and orthodox churches and mosques; all of them blend gorgeously in the urban tissue and mix graciously with the hundreds of Byzantine churches.

Ohrid is a pleasant town with a beautiful atmosphere.

You can spend some days between urban explorations, beach relaxing and water sports. The new town has a beautiful lake quay, flanked by the major hotels. There are bars, benches, small harbours, birds and peace.

The city and the lake are both listed in the World Heritage Sites List by UNESCO. Ohrid is one of only 28 sites that are part of UNESCO Cultural as well as Natural sites.

If you like photography as I do, these are the seven unmissable hot points of the town.

But even if you don’t like photography, don’t miss these beautiful places!

Ohrid is a scenic city and the old town is the gem on the crown. It has been built on a hill directly on the lake. Among forests and cliffs, you can find almost all the Byzantine churches. And you also get magnificent views of the lake.

You’ll also find traditional mansions, covered streets (for defensive purposes) and narrow cobbled streets leaning inward with a canal in the middle to convey the rain. These are the oldest ones in town. If you follow these old streets from the lakeshore, you’ll eventually get to the peak of the hill. During the walk, you’ll see Byzantine churches, old and charming buildings, a Hellenistic theatre built in 200 BC and bright sketches of daily life all around.

The top of the hill is the site where the Tsar Samuel’s fortress stands, 100 metres above the lake surface. It is one of the largest medieval fortifications in Northern Macedonia.

Its ramparts and fortified towers occupy a huge area, unfortunately rather empty. Throughout history, the fortress has been destroyed many times, rebuilt and upgraded. It bears marks from almost all the historical eras when Ohrid was ruled by the Romans, Byzantines, Slavs and Ottomans. But this intricate history left its mark with huge destructions. Apart from the ramparts and a tall and huge Northern Macedonian flag, there isn’t much more to see. But, from the ramparts, you get fantastic views over the old town, the modern town and the lake.

You’ll find this church in the lower part of the olf town, not far from the lakeshore. It’s, without doubt, one of the most beautiful Byzantine churches in the area, with a long and interesting history.

Built upon the foundations of an old Christian construction at the time of Tsar Samuel (976-1014), it was the seat of the Patriarchate of Ohrid.

During the Ottoman rule, it was converted into a mosque and its frescoes were covered with lime.

During the Balkan Wars (1912) was used as a storehouse for weapons. Only after WWII, the lime was removed and the frescoes cleaned and refurbished.

Saint Sophia is still an active church and, due to its magnificent acoustic, is a key location for cultural events.

Visit it in the evening to appreciate the light vanishing out behind its silhouette.

Kaneo is a fishermen’s village built in the tiny space between the hill and the lake. Today it hosts some nice beach bars, a couple of piers and a small church exactly at the edge of the lake.

To get there from the town centre you walk along a scenic footbridge over the lake. The view from here is superb and very romantic. Consequently, no surprise that the bridge’s handrail is covered with love padlocks. A long list of optimistic promises to the future. And every time I see this love padlock, with names and dates engraved on them, a question arises: if unfortunately one of these romantic relationships will go to an end, will somebody come back to the site and remove the padlock? Joking, of course.

You can get lost in thoughts like this while walking along the footbridge. Anglers test their luck and ability and motorboats sail the lake.

Once out of the footbridge, you can visit the village that has a nice atmosphere and some inviting terrace bars.

The road ends at the edge of the hill and nestled among the lake and the hill there is another tiny byzantine church. Another tranquil spot with a superb view.

From Kaneo you’ll get for sure also the chance of having a boat ride. That’s plenty of boatmen ready to hire their services at very reasonable prices.

5. Church of St. John the Theologian at Kaneo

The hill that marks the end of Kaneo village and under which the church stands is a scenic promontory that ventures into the lake. You can climb on top following a footpath with many steps. The effort is worth it, because once on the top you’ll be at one of the most beautiful and scenic spots of the entire area.

The Church of St. John the Theologian at Kaneo is built on this cliff directly over the lake. The church is a beautiful blend of Byzantine and Armenian architectural styles. Here you can understand why Ohrid was chosen by the ancient monks as a site for prayer and meditation. You could sit here and contemplate for hours the beautiful landscape, until the sunset, when the scenic is at its peak. So, imagine how could an ancient monk feel, while looking for silence and beauty for his meditation end spiritual contemplation!!

Sweat a bit more, go following the steps and you’ll get the view that is the typical postcard of Ohrid: the church with the lake and the mountains in the background. Breathtaking sunsets here.

Now that you’re on your way, keep on following the footpath through a thicket. Once out you’ll get to another church. It was built in 893 AD by St. Clement of Ohrid and dedicated to St.Panteleimon. You are now in Plaoshnik, an interesting archaeological site.

The church of St. Panteleimon isn’t at all the oldest building in the area. If you look around, there are the remains of a medieval basilica,. with some mosaics depicting a slightly familiar shape.

Swastikas are much older than Nazism and bring high values of positive symbolism. Consequently, no surprise you find them on the floor of a basilica.

Plaoshnik is the heart of the ancient and powerful Ohrid, the gateway of trades and cultures that dominated the area in the Middle Age, the headquarters of the Ohrid Literary School. Here Clement started to work on the new Cyrillic alphabet. Here thousands of scholars were taught, becoming later ambassadors of the Slavonic culture.

St. Clement is buried in this monastery, in a tomb which he built with his own hands.

The church served as a mosque under Ottoman rule and not far from it you can also find a beautiful Turkish shrine, Sinan Celebi Turbesi. It was part of Sultan Mehmed II’s complex, made in 1491. It included a mosque, madrasa, kitchen, Islamic school, caravanserai, hammam and hospital. Almost everything has disappeared but the shrine.

Being on the side of the hill, from Plaoshnik you also get a great view over the old town and a good part of the lake. There is also a small and sweet coffee bar. You can sit under the sun and look at the landscape while sipping a drink.

7. The old bazaar and minarets

The charshiya is the old bazaar area, a remnant of the Ottoman domination, but still a very lively and busy area.

Right in the centre of the old town, a long pedestrian street at the base of the old town hill is flanked by shops and stalls. It starts at the farmers market, in a square closed by a mosque and goes straight to the lake, flanked by shops of every kind: from tourist souvenirs sellers to butchers, Balkan sweets and the famous Ohrid pearls, fine silver filigree, painted icons, and roasted chickpeas.

Some of the buildings along the street are original ottoman buildings, and there is also a beautiful mosque. A bit far away, uphill, you can also spot a catholic church.

Another attraction is the Ohrid Chinar, probably the oldest tree in Macedonia. You find it in the middle of Krushevska Republika Square, where the market street starts.

This sycamore is said to be 900 years old, even if more realistic estimations set its age at 600 years: a nice age anyway! Being so old, the tree isn’t in its best shape even because restricted to a small area, surrounded by concrete. But the trunk’s diameter is impressive and people say that it hosted in the past a barber’s shop and also a very small cafe! 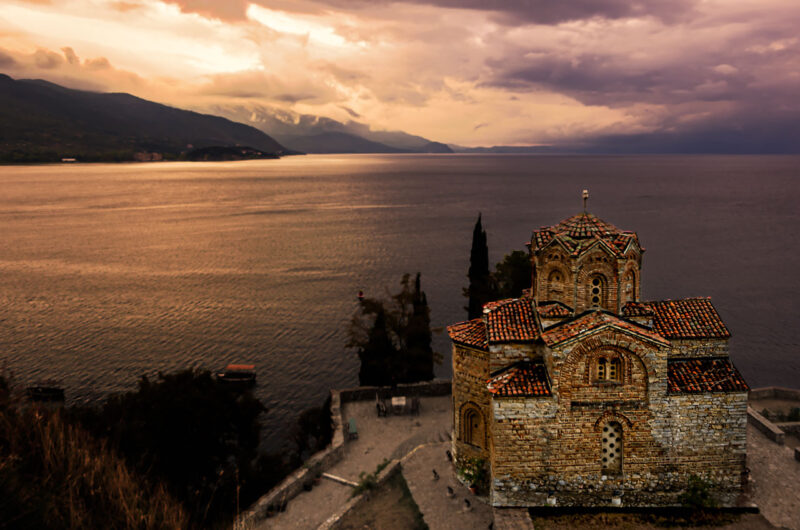 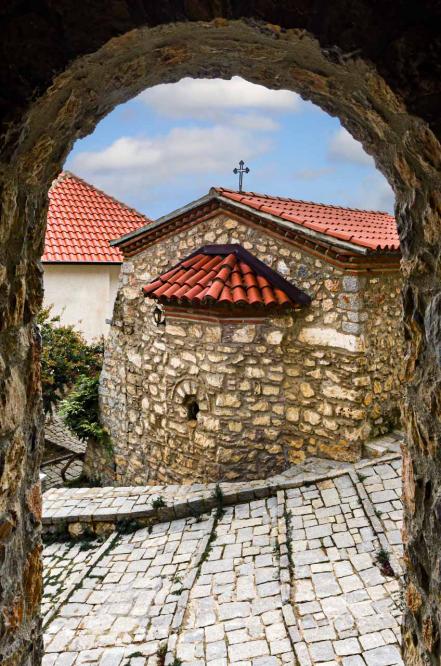 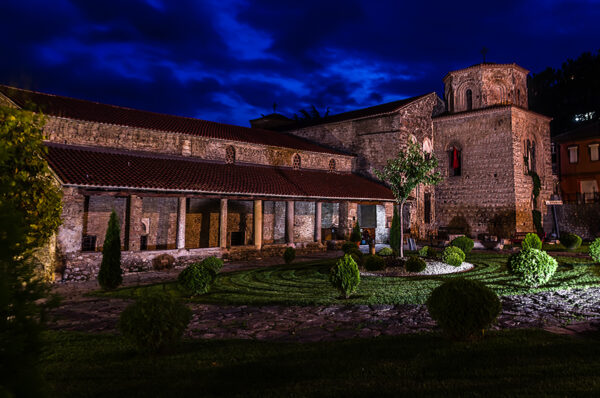 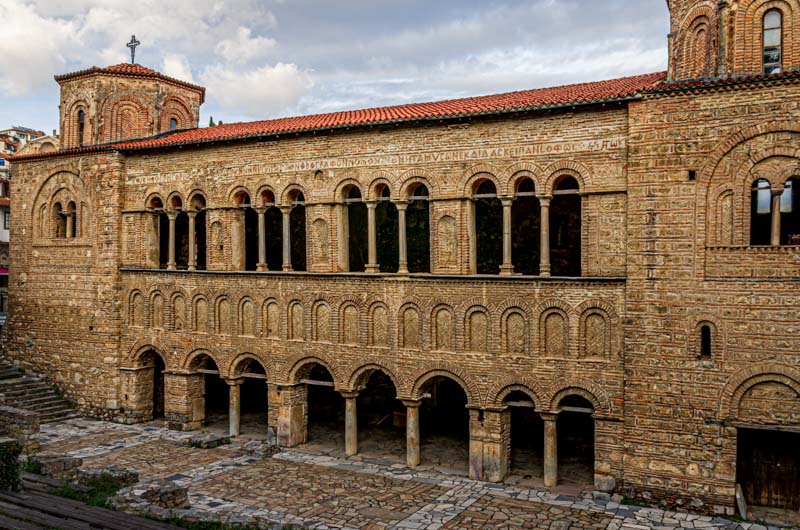 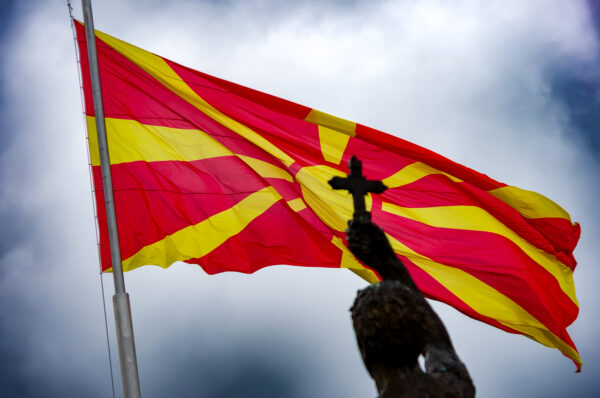 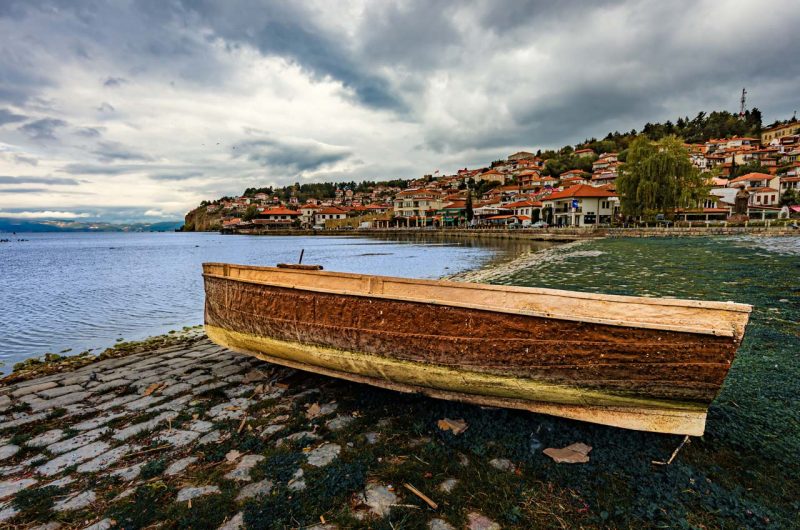 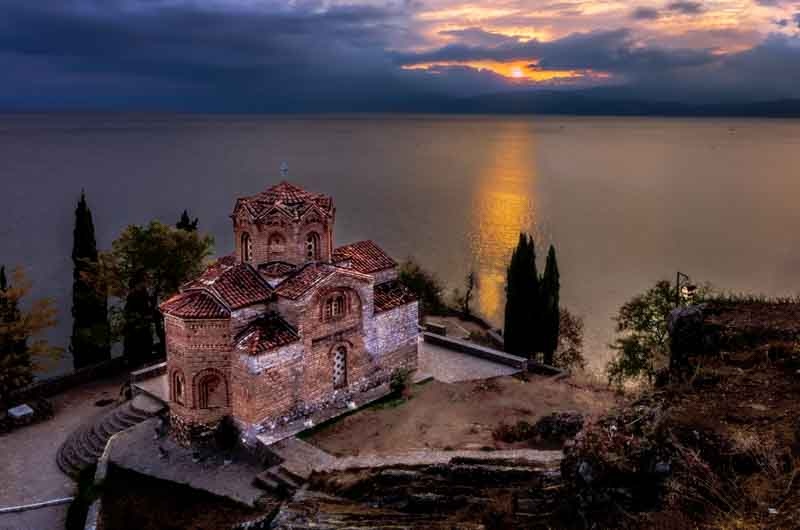 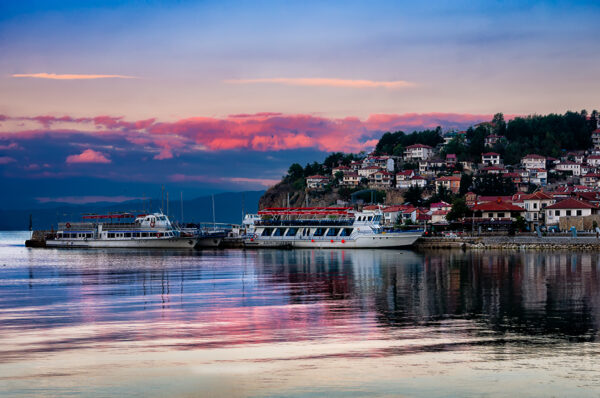 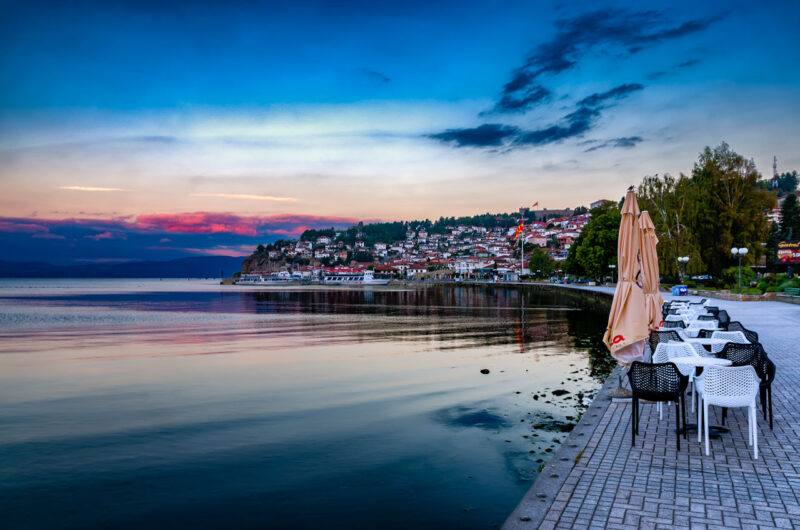 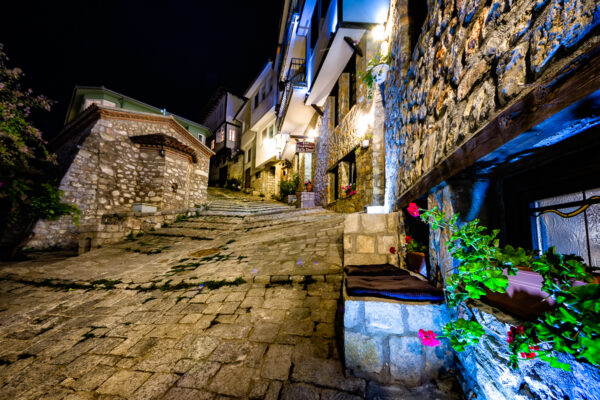 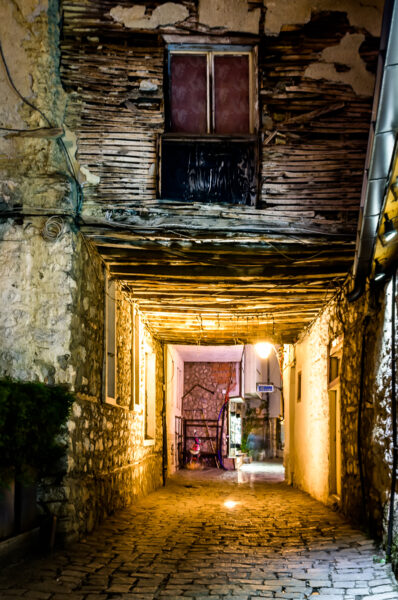 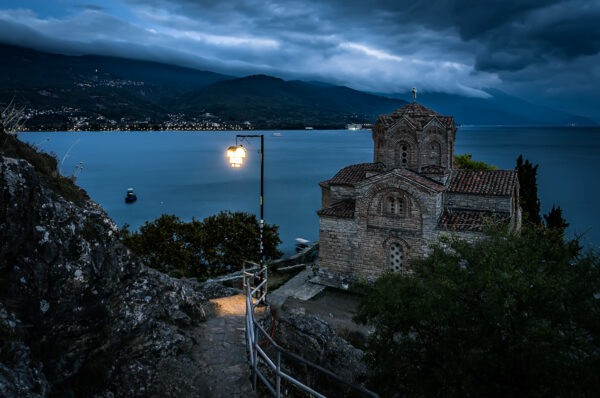 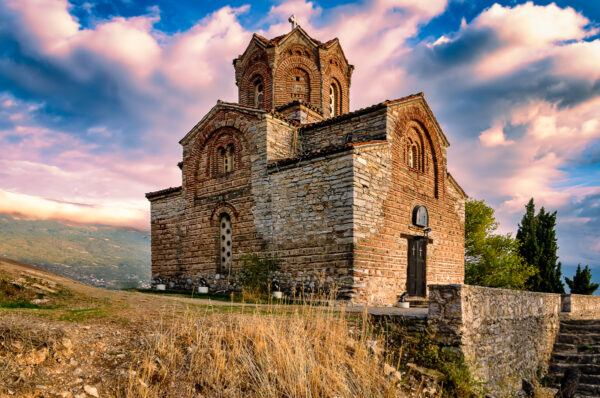 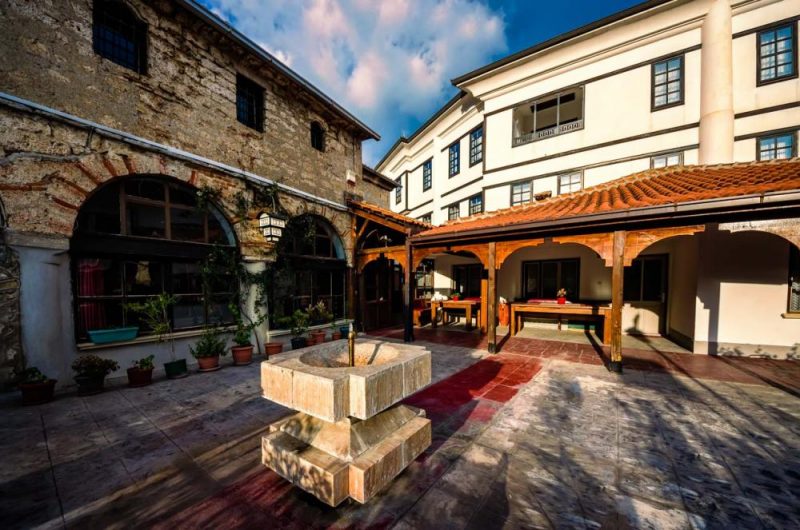 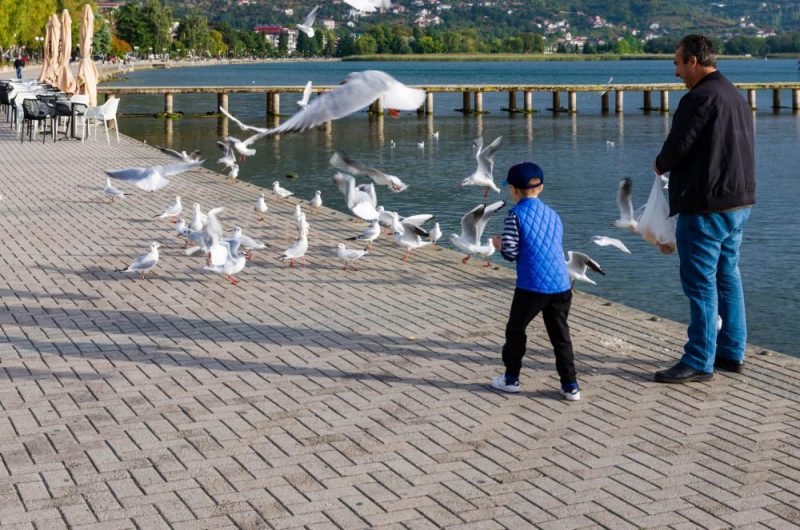 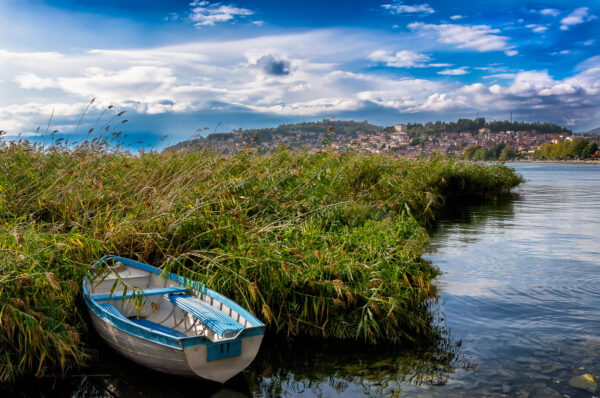 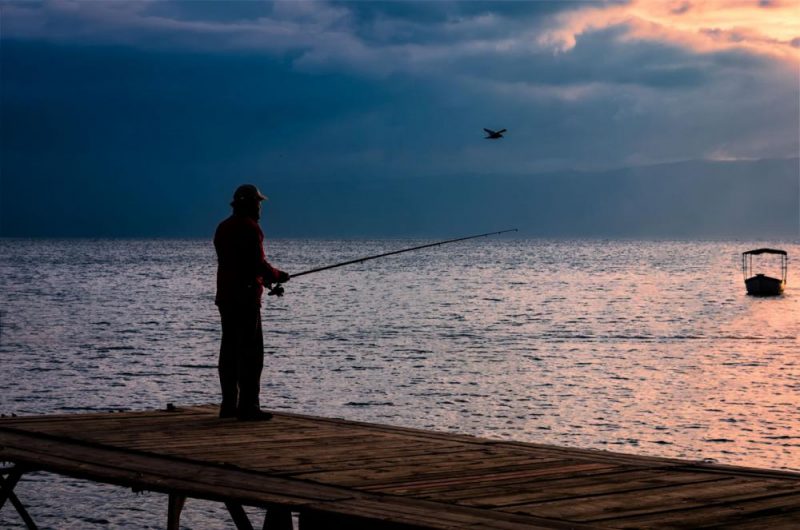 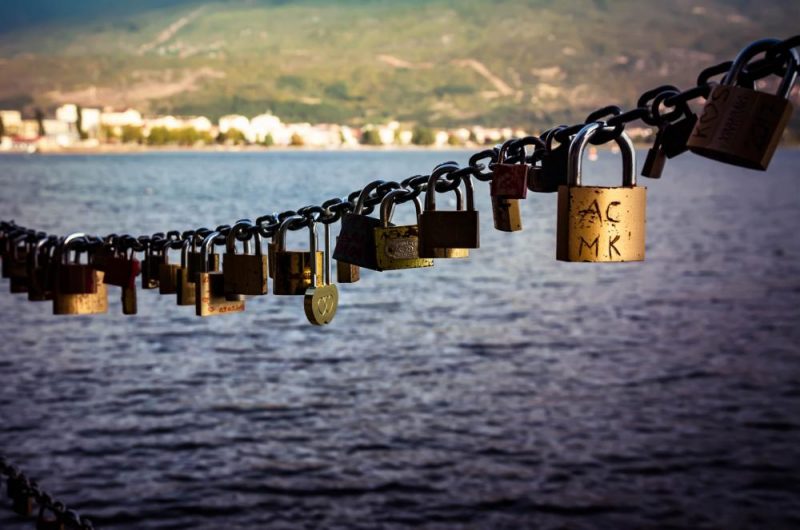 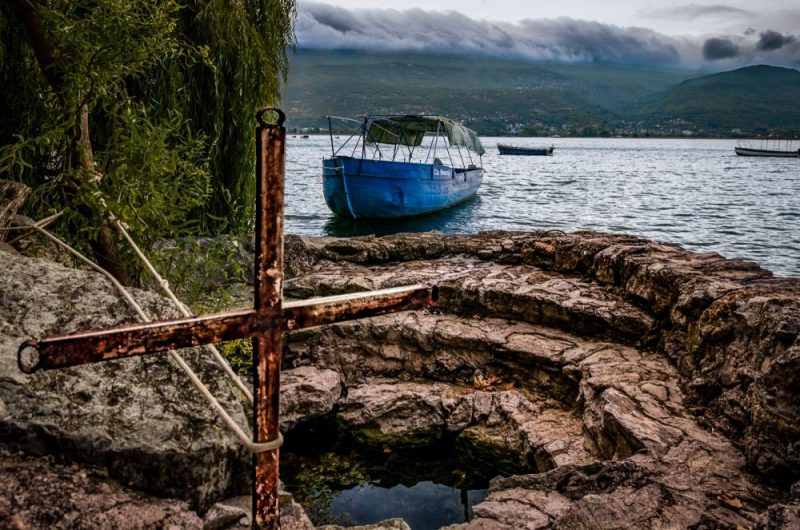 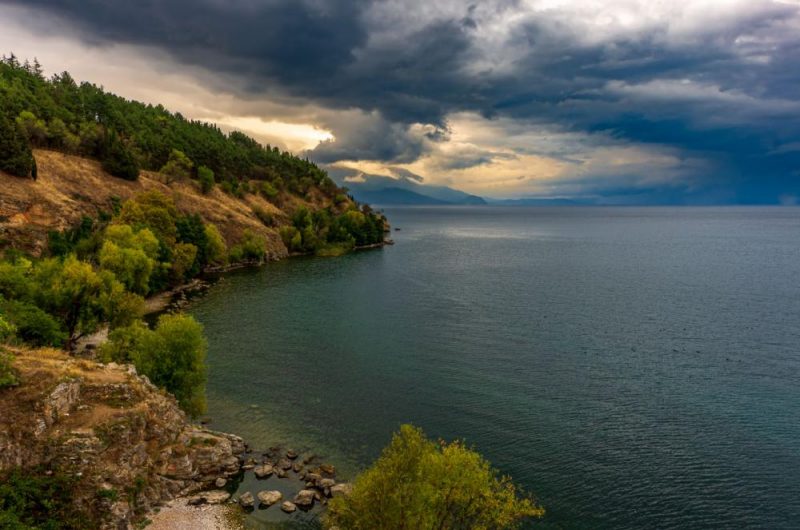 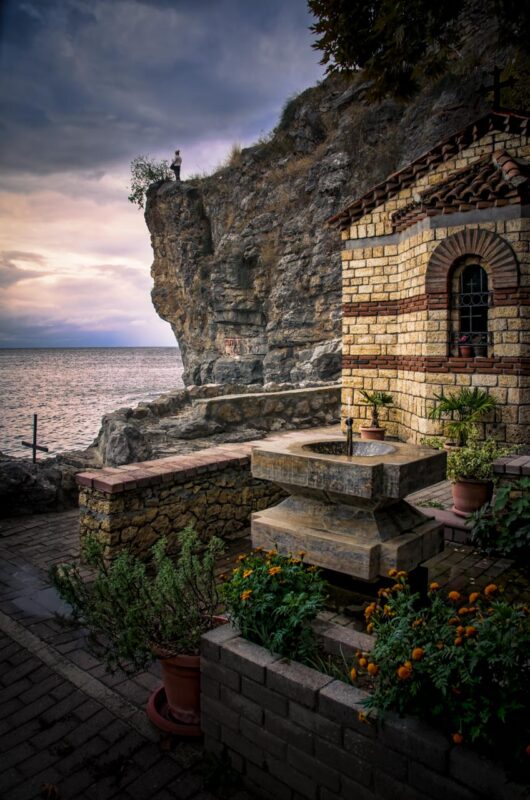 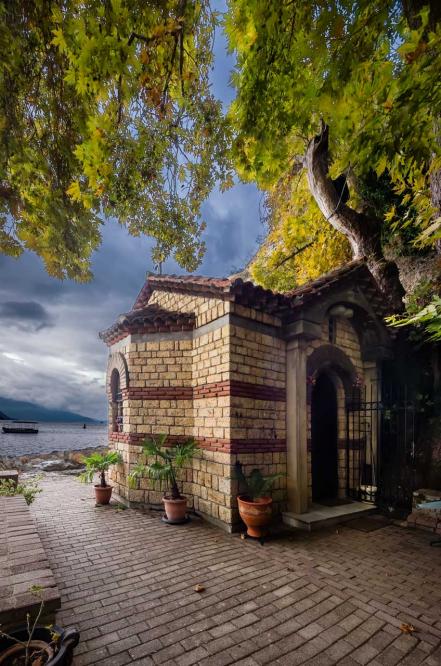 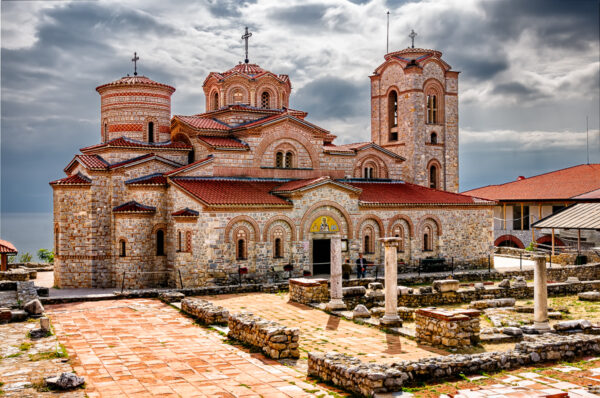 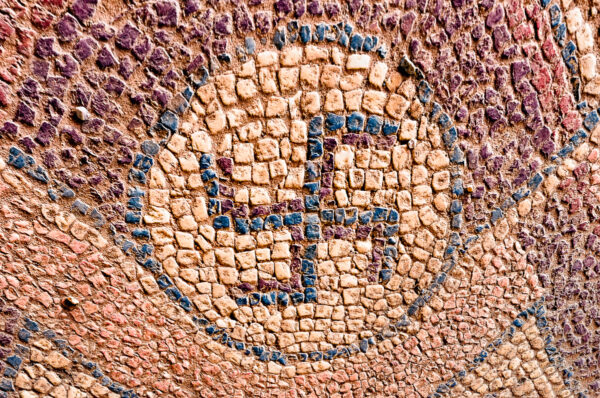 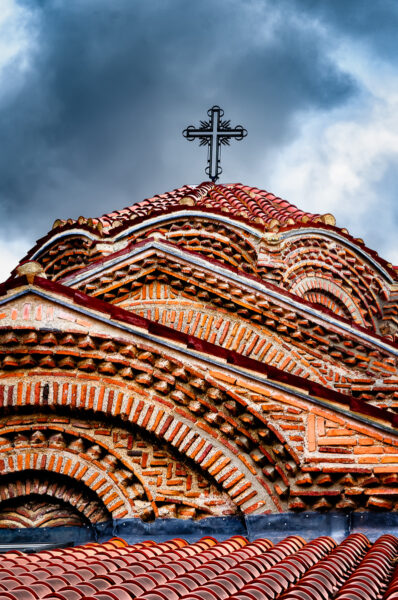 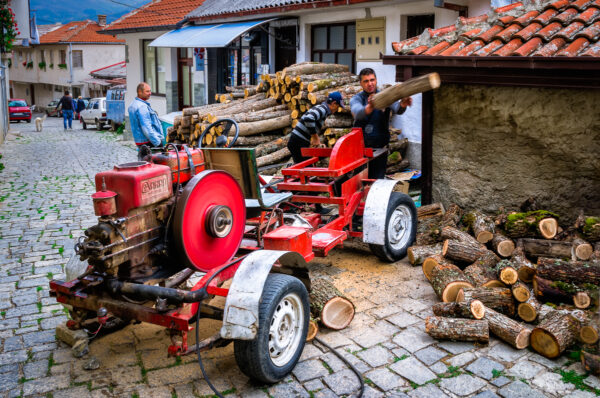 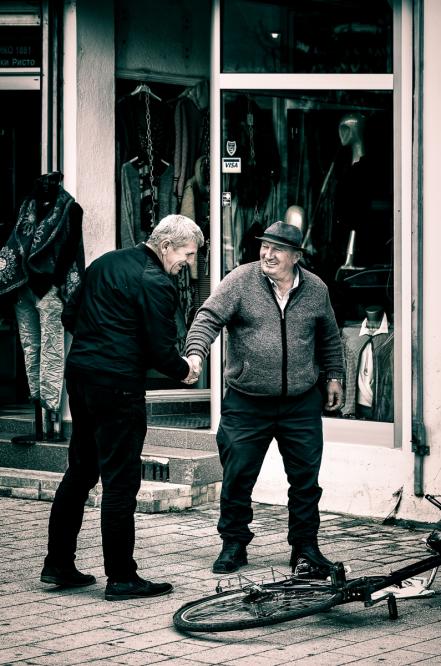 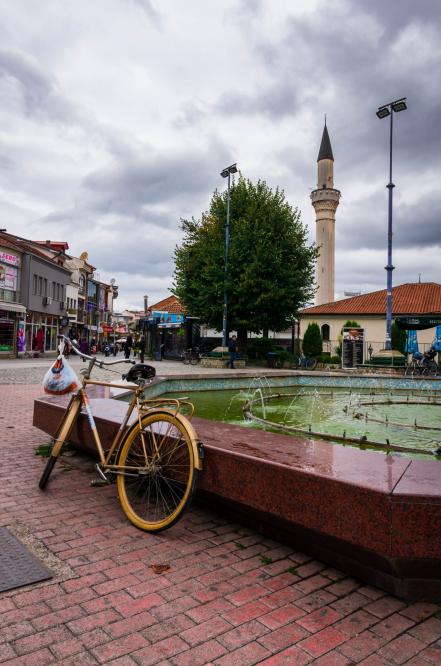 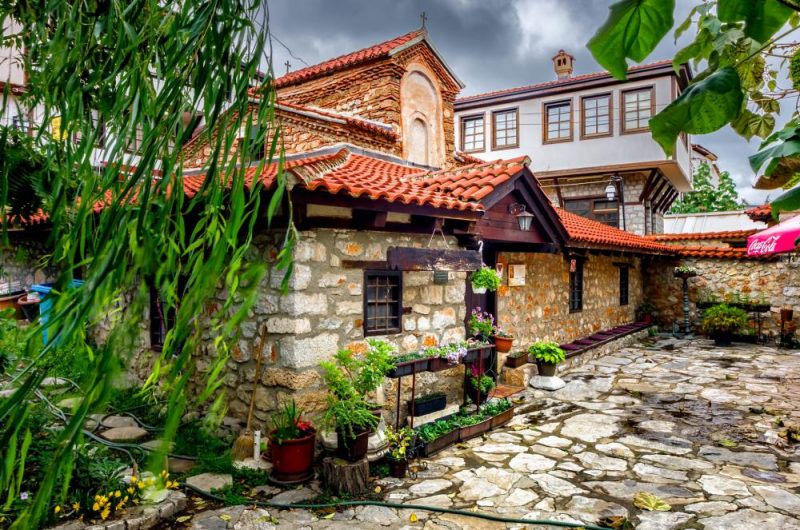 2 thoughts on “The Magic Of Ohrid: 7 Outstanding Photo Opportunities”