The man was crafting and selling copperware in a small shop in one of the overcrowded narrow streets close to the old Bridge of Mostar.

He dressed completely in white. Long white hair and beard and a beautiful cap. His age was indefinable: the beard let me think of an elderly, but his eyes were young. Let me say he was around 50. It means that during the siege of Mostar in 1993 he was maybe around 25 .

He didn’t speak any other language than his own, and we could interact only with gestures.

He behaved in a gentle way, with calm gestures and instilled tranquility. With his big hands he could craft delicate pieces of craftsmanship. But what about holding a rifle?

Yes, of course, I bought something.

But all the questions remained buried inside me.

What atrocities has he seen? What did he survive? Did he kill somebody?
No one living there at the end of the XXth century is immune, I am sure. 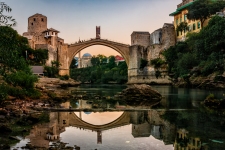